"Within a matter of weeks, I was already urinating more comfortably than I had in probably 10 years. It's totally changed my attitude. I'd just gotten so used to it, I didn't understand fully how it was impacting my life." - Jim 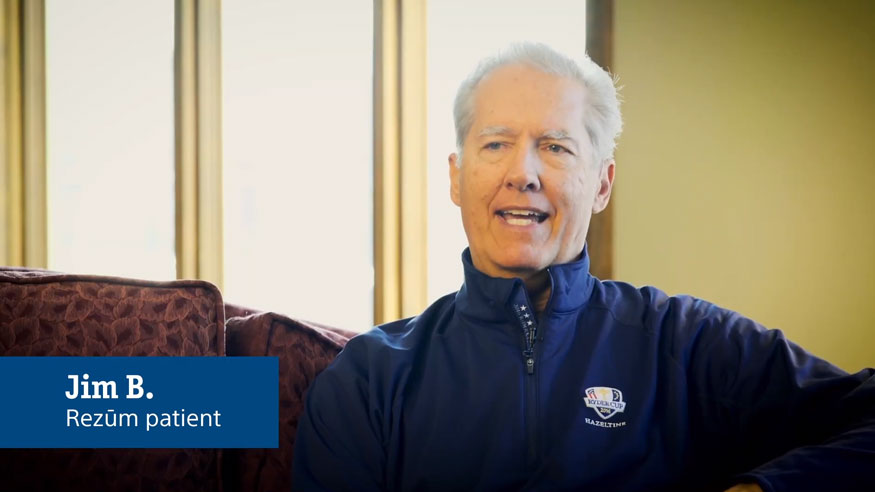 For more than 15 years, BPH had taken a toll on Jim's life. His sleep, his mood, his activities, and his relationships were all affected by his BPH. It was always on his mind. And he thought it would never go away. But he never gave up looking for a treatment that could change all that. Then he discovered Rezūm Therapy. Jim was stunned that a short, simple, relatively pain-free procedure could deliver such great results so quickly. In a matter of weeks, he was urinating more comfortably than he had in years.

In the last 15 years, BPH has affected my life more and more. I was getting up as many times as two or three times a night and during the day I'd be going constantly. It affected my sleep. I could tell it affected my wife obviously and I think it also caused some irritability because of the lack of sleep.

You go into a restaurant or a bar and you check out where the men's room is as you're walking in because you know you're going to be going there later.

When I read about the Rezūm procedure, it created an expectation that this was going to be a simpler process.

On the day that I was going to have the procedure, I went into the procedure and they insert a probe into the urethra all the way up to the level of where the prostate is, and then that's where they do the injections directly into the prostate. And again, it was about six momentary mild stings or kind of warming sensation but really minor I mean I was apprehensive, but it was really very minor and that was it.

When the procedure was finished, the OR nurse helped me self-catheterize right on the spot and I saw that it's really pretty easy and I only had to do it for about a day and a half. What I noticed is within just a few days, the urges stopped. Within a matter of weeks, I was already urinating more comfortably than I had in probably ten years.

It's totally changed my attitude.

I'm far more cheerful just having gone through this and realizing now that this is going away as a problem, what I was dealing with. I’d just gotten so used to it, I didn't understand fully how it was impacting my life. And it's just a thrill to have gone through such a simple procedure and gotten such great results so quickly.