“If you have a BPH problem, the Rezūm procedure is the way to go…I would recommend it to anyone.” - John 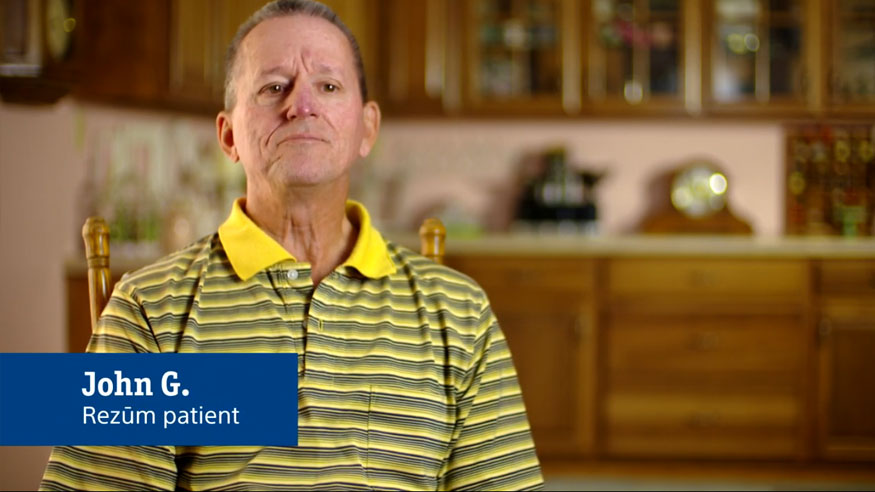 When John’s wife, a nurse, suggested he see a urologist, he’s glad he listened. Because he had considered his BPH symptoms a natural part of aging and didn’t think anything of it. Once he talked with his doctor and did some online research,  John took a closer look at the Rezūm Therapy procedure. His big concern was how painful it would be. But after John watched his own Rezūm procedure on the video screen, he was able to go home that afternoon and back to work the next day. Now he tells friends that the sooner you get it done, the better. “It’s a piece of cake.”

I mentioned to my wife, who’s a nurse, that I was having trouble starting my stream. And when it did start it was very weak. And she says, you need to go see a urologist about that. And otherwise I wouldn’t have gone in. I didn’t think anything of it. It’s just a normal part of old age.

After my wife suggested I go see a urologist, I started doing research on the issues and there are some videos online describing the Rezūm procedure and the symptoms, if you’re having them, you should come in and get looked at. And so, I did.

My biggest concern for the procedure, that’s a rather tender part of my anatomy, and I was wondering how painful it was going to be. It wasn’t terribly uncomfortable during the procedure. I watched on the monitor while he ran the device up into the urethra and blew the steam through the walls of the urethra relieving the constriction there and went home that afternoon and back to work the next day.

Three days later we removed the catheter. And you’re wondering what it’s going to be like the first time you urinate afterward. It was breathtaking, it was very pleasant in fact.

It’s been seven months since the procedure and no complaints. And I would say the sooner you get it done the better. And it’s a piece of cake. One of the advantages to Rezūm that I like is that you don’t have to take medications afterwards. I’m not one who enjoys taking medication. To me that’s a nuisance. And this is something that solves the problem.

If you have a BPH problem, the Rezūm procedure is the way to go. And that’s why I chose it.