“After having the procedure…I mean it’s just totally different. I have no problems whatsoever. I have already recommended this to other people. It’s the best thing I’ve done. I wouldn’t wait" - Tim 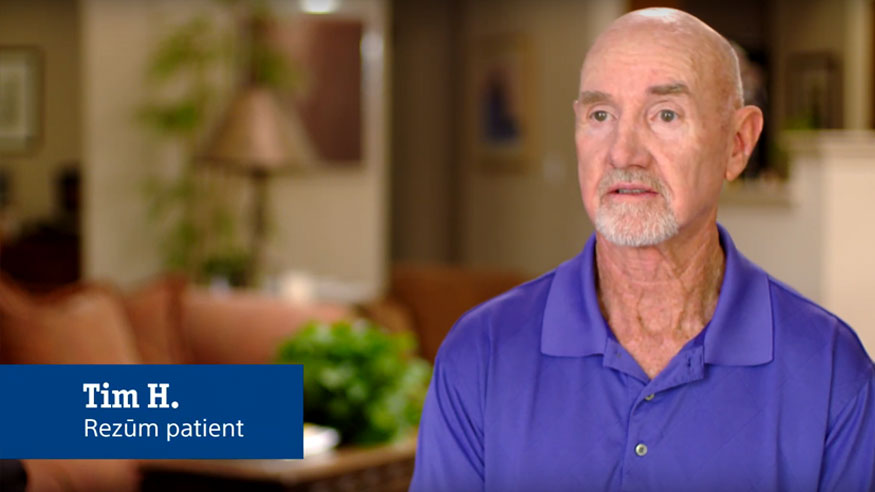 Prescription drugs were not an option for Tim. And he was reluctant to consider invasive surgery. Even as his BPH got worse, making it harder and harder to urinate and intruding on his life. Supplements worked for a while, then not at all. When his urologist told him about Rezūm Therapy, it gave Tim hope. That he could sleep through the night. Work uninterrupted. And stop planning his travel routes around rest stops. Rezūm Therapy worked for Tim. Now he enthusiastically recommends it to others as the best thing he’s ever done.

I was reluctant to use any of the standard prescription drugs that people were using. So, I tried some over the counter and they’re natural drugs. And they worked for a while. But after a while it just didn’t work at all.

I didn’t know about Rezūm until I met my urologist. I didn’t want to have some of the regular surgeries that they talked about. And I was reluctant to do that. So, meeting that urologist was the best thing I did. I decided to go ahead with Rezūm because I had looked online and saw that there were side effects with drugs or some of the surgical procedures that I didn’t want to go through.

And the procedure didn’t last very long. I was surprised. I thought it’d take longer but it didn’t.

Everything was done in the doctor’s office. I mean they didn’t have to go to the hospital or any of that. And I actually drove home. So, it wasn’t a bad thing at all.

After having the procedure, where I am now, five months later, I mean it’s just totally different. I have no problems whatsoever. I sleep at night. I still get up once in a while. But nothing like before. I would get up many times in the night before to go to the bathroom. And don’t have any of that now. It’s back again like I was literally 30 years ago or something.

I have already recommended this to other people. It’s the best thing I’ve done. I wouldn’t wait. Why wait? It’s not going to get better. So, you need to take care of it in some way. And this is… I just can’t recommend it enough. I mean it’s just so different it’s unbelievable.